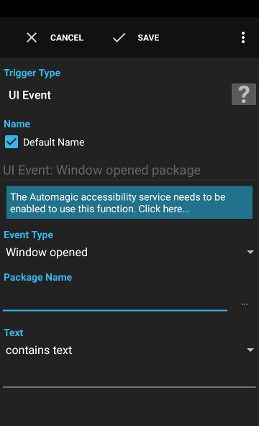 The trigger UI Event executes a flow when the system detects a change in the user interface, for example when a window is opened, a button is pressed, a list is scrolled, text has been entered etc.

Note: The system informs Automagic not about all events. Some events that occur very frequently can be skipped by the system.

Examples:
Settings
Event Type
Package Name
The list of apps to consider by this trigger. Glob patterns (*, ?) are supported.
Text
The text that should be contained in the event.
Remove non-printable characters from text
Whether non-printable unicode characters should be removed from the text like left-to-right marks that might be used in components on the user interface.
A variable is a container for a value that can be used in many actions and conditions to dynamically define a part of a text.
See action Script for a description.