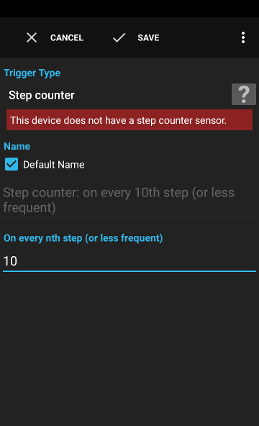 The trigger Step counter uses the Step counter/Pedometer of the device and executes a flow when the specified number of steps have been counted. The device can optimise the battery usage and inform Automagic less often when the display is turned off.

Warning: This trigger uses the device hardware sensors and might increase battery usage (depending on device model). Some devices do not count the steps when the screen is off.

Examples:
Settings
On every nth step (or less frequent)
Defines after how many steps a flow should be executed. The step counter can inform Automagic less often to save battery.
A variable is a container for a value that can be used in many actions and conditions to dynamically define a part of a text.
See action Script for a description.


Supplied Variables
triggertime
the time the trigger executed
step_count
the number of steps since the trigger was enabled
step_count_total
the number of steps counted by the sensor since the last reboot
last_step_time
the point in time of the last detected step. Automagic attempts to provide a regular system time but might fail on some devices due to differences on ROMs.