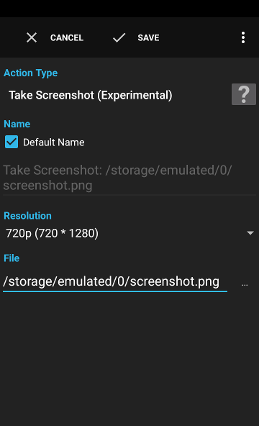 The action Take Screenshot (Experimental) creates a screenshot of the currently displayed screen.

Tip: Action Execute Root Command: screencap -p image.png can be used on many rooted devices to take a screenshot on older versions of Android.

Note: Android delivers the screen content compressed to Automagic, the quality of the image is not always optimal. Some devices only allow to take screenshots with a low resolution.

Note: Views that are marked as secure by the displaying app can not be recorded.

Note: The display has to be turned on to take a screenshot.

Examples:
Settings
Resolution
The resolution.
File
The path of the file to store Variables are supported.
A variable is a container for a value that can be used in many actions and conditions to dynamically define a part of a text.
See action Script for a description.


Supplied Variables
operation
"ok" when successful, "cancel" when interrupted
output_path
the target path of the screenshot