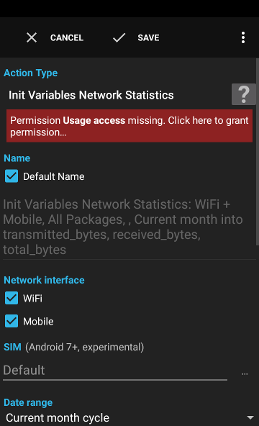 The action Init Variables Network Statistics queries the transferred amount of data of the specified network interfaces.
The network statistics are recorded by the operating system itself and is stored in blocks of two hours (device dependent). Queries that don't fall on such a two hour limit, will be interpolated (device dependent) so results might not be accurate especially for short time intervals.
The data of the network statistics is stored for each UID (user identification) of the executed process. Many apps/packages of the system are aggregated under UID 1000 and can not be differentiated further. The package selection shows the UID in brackets.
Data not available to the network statistics of the device can not be considered by this action (e.g. when a device is factory reset).