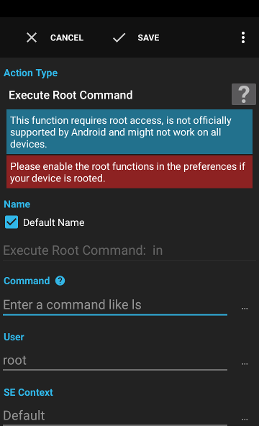 The action Execute Root Command executes a shell command as root by passing the command to su and stores the output in variables.

Warning: This function requires root access, is not officially supported by Android and might not work on all devices.

Examples: String variables are replaced before the command is passed to the interpreter.
You can use this for example to create a filename based on the current date: ps > file-{triggertime,datetime,yyyyMMdd}.txt.