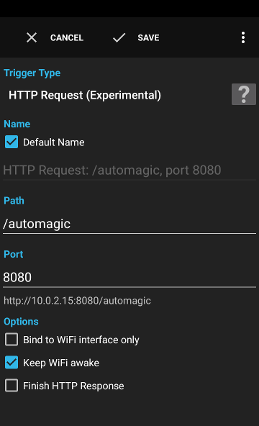 The trigger HTTP Request (Experimental) is executed when a HTTP request is received using the specified path and port.

Note: The built-in webserver is neither fast nor should you try to upload large files. Please don't use it to run webshops, corporate websites or sites like Slashdot on your phone.

Examples:
Settings
Path
The path to handle by this trigger. Glob patterns (*, ?) are supported.
Examples: The trigger with the longest path is preferred when multiple triggers match requested path since only one response can be written.
Examples: The first trigger is preferred when two triggers with paths /automagic/test and /automagic/* are available.
Port
The port of the server.
Bind to WiFi interface only
Whether to listen for HTTP requests on all interfaces or just on the WiFi interface.
Keep WiFi awake
Whether to keep the WiFi radio awake, otherwise the WiFi radio might turn off to save battery and a connection to your device is no longer possible.
Finish HTTP Response
Whether to finish the HTTP response by sending an empty response to the client.
A variable is a container for a value that can be used in many actions and conditions to dynamically define a part of a text.
See action Script for a description.